I decided that I need an air purifier for various reasons. The main one is that I spend over 12 hours in the same room (as my bedroom is also my office – which is not a perfect setup, I know!) But, ideal or not, the truth is that I spend so much time in a single room and I need to make sure that everything around me is as perfect as it can get – including the air that I breathe.

I am fortunate enough to live in Europe, in an area where the air quality is not as bad as it is in other parts of the world. I do suffer from all sorts of allergies, though, and hearing that the Xiaomi Mi Air Purifier cleans the air from allergens as well as other harmful microscopic particles – and it doesn’t cost an arm and a leg like most highly reviewed air purifiers do – I decided to give it a try.

I did a lot of research before making the purchase and I concluded that the Mi Air Purifier is the safest bet here: since I wasn’t entirely confident that it will make a difference, I considered its low price a risk worth taking. Cheaper products had bad reviews and other air purifiers that had similar or better reviews were a lot more expensive.

So I placed my order on Gearbest, which is a site that usually ships directly from China, but might have options to send from the EU, US or other parts of the world – you just have to check out and see, but the truth is that it doesn’t really matter where it gets shipped from as it is the same product. And then, a couple of weeks later, the little fellow arrived! 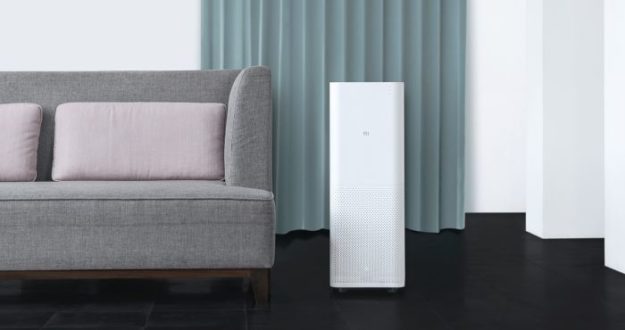 Now, it’s worth mentioning that there are a few models available out there: we have the original Mi Air Purifier, we have the Xiaomi Mi Air Purifier 2, there’s the 2s, an International Version… but all in all, apart from some minor design differences, these products are basically the same thing. They have similar designs and work the same, they use the same filters… so I’d say that this review would apply for any model. But it’s worth having in mind that I have the one I linked to above.

How does the Mi Air Purifier work?

Now that we’re over the huge intro, let’s get straight to the important part: how does the Xiaomi Mi Air Purifier work and, most importantly: should you get one?

The way this air purifier works is really simple: it is built like a tube with a filter inside, and an internal fan that twists and turns the air in your room. There are small holes to the side of the Xiaomi Mi Air Purifier that allow it to suck in all the dust and other particles (microscopic or not), which are then kept in the device’s air filter. So it basically sucks bad air in and pushes clean air out.

From starters, the thing that I liked the most about this air purifier is that it can connect to your smartphone via an app and you can control it with your phone – as well as get interesting information about the air quality, how much of the filter is left, how much it has been running and so on. Here’s how things look in my case, at the moment, in terms of usage: 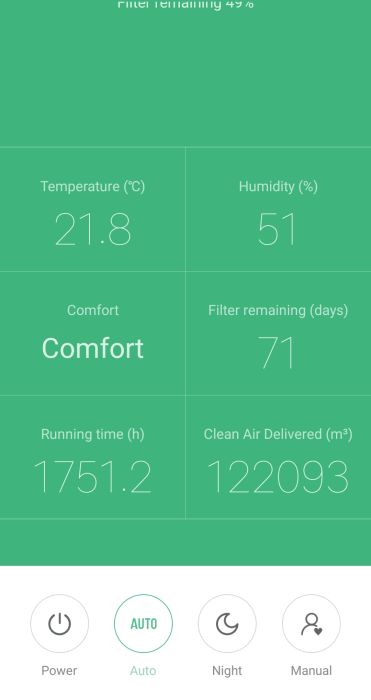 So, after using it for over 1750 hours (which is almost 3 months, since it didn’t run non stop), I can say that… I still don’t know if it works. Yup, not the answer that you wanted to hear, but definitely the truth.

I’ve heard many people saying that they completely felt a difference, that they started breathing better and so on and so forth… but that wasn’t really my case. Sure, the app itself tells me that the air quality is sometimes low-ish at around 40 PM2.5 which is towards the higher limits of the “good” air quality and with the Xiaomi Mi Air Purifier turned on, the numbers go down to 9 PM2.5, which is great… but the truth is that it’s not really a difference you can feel.

All I can say is that I have tested it and started shaking a messy rag around it – it was old and full of dust and the app instantly jumped to over 100, recovering eventually as the air purifier did its job. So it definitely works and it does clean the air. Probably you get to really feel the difference if you’re in an area with more polluted air: I guess that going down from a constant 200 or 100 to a 9 is easier felt than going down from 40.

But it does work and even though the air quality in my room is generally not that bad, it still is great to know that it is improved and the number of dust and other microscopic particles are kept to a minimum.

Now, the biggest thing that I wanted an air purifier for is one that I didn’t get the chance to test, yet: pollen and my allergies. I bought this at the end of the allergy season and it hasn’t started again yet. That will be the major test for this air purifier and I will make sure to update you with my thoughts. I’ve heard many people say that it does make a difference and I can’t wait to test it! I know how horrible the allergy season is for me despite the medication I take, so having that improved would be a major game changer.

So even though I am not as excited as other people were after trying out the Mi Air Purifier, I am not disappointed either. I did start to feel a bit better and breathe a little easier after a few days of it running in the bedroom and I might feel a bit better overall… while my nostrils also seem to be cleaner than before. So it does seem to work.

There is one pretty annoying thing about the Mi Air Purifier: it has multiple fan speeds that you can activate or deactivate as you see fit. The highest fan speed seems to be the most effective, as it really stirs and shakes the air and the dust and other particles in the room.

The problem is that the device automatically slows down after 3 hours, meaning that if you want it to run at full speed constantly, you have to either press the button on it or use the app to turn it back on.

Now, the engineers who built this probably know better than I do and 3 hours might be enough to clean the air in the room for a longer period of time. But the truth is that on the low fan speed, the Mi Air Purifier doesn’t seem to be able to stir things up. It might keep the air around it extremely clean, but not the entire room. 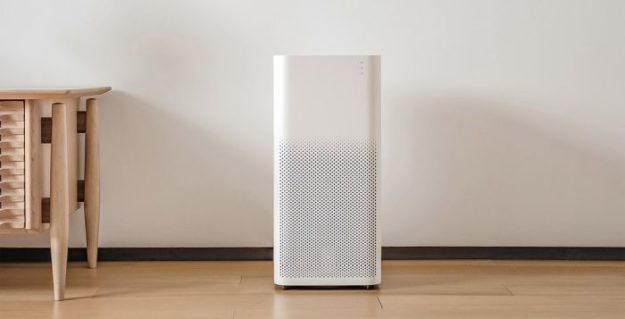 On the other hand, it does have a lot of time to cycle the entire area in 3 hours and clean the air thoroughly, so if you don’t open the window or allow air pollutants back in, you should still enjoy fresh, clean air.

The problem of the high speed fan is also that it’s not the most pleasant thing to have around during the winter, but I do think it makes everything more pleasant during the summer as it also cools you down a little bit.

Compared to all the other air purifiers that I saw – cheaper or more expensive, the Mi Air Purifier is the winner, in my opinion, in the design category. Apart from a minimalist, elegant look, I also thing that it’s rectangular shape makes it perfect for keeping the air cleaner, as it basically has a 360-degree working area, sucking in the microscopic particles on all sides.

It is also made in such a way that it remains silent, even when the fan is running at top speed. I haven’t tried sleeping with the high speed fan on as it’s still winter here, but I don’t think I would have a problem with that. However, it would turn off after 3 hours anyway, going silent as the auto mode can barely be heard. So if you’re worried about noise – don’t be! It’s not a problem, even with the fan at maximum speed.

Xiaomi claims that their air purifier needs about 10 minutes to completely clean the air in a regular sized room, so the 3 hours it works on high fan mode should be more than enough for it to deliver and keep your air as clean as possible.

Now, looking at the numbers and indicators on the smartphone app, it does a pretty solid job when it comes to cleaning the air. It even recorded an increase in harmful particles when I did the dirty rag test and cleaned the air up in a breeze (no pun intended!) So it definitely works as advertised.

From a personal point of view, I can’t say that I really feel a major difference. However, since the air around me wasn’t insanely polluted anyway, it’s understandable. The air pollution is something that harms our bodies long term and generally you won’t feel too much of a difference when the air becomes cleaner – or so I believe. But it should definitely help your health long term and I am confident that the Xiaomi Mi Air Purifier does that.

Have in mind that although the product itself is really cheap compared to others, its replacement filters don’t follow the same rule and are pretty expensive. You can order new filters on GearBest or Amazon. (Affiliate link) However, all air filters are expensive when it comes to air purifiers, so there’s not much you can do here… but it’s an investment worth making and you will most likely only change the filter once throughout the year.

All in all, I believe that investing in an air purifier for at least the room where you and your family spend most of your time is a smart decision. These products are becoming, unfortunately, a necessity and not a luxury item in our world today and we owe it to ourselves (and our families) to do our best to keep us healthy. This does mean that we should do everything we can to keep the planet clean and healthy… but also use technology to help when we can’t.

Being fairly priced (despite the relatively expensive air filters), the Xiaomi Mi Air Purifier is a product that I will definitely keep working in my room, knowing that the air that I breathe is safer thanks to it.

If you agree, you can order yours now from GearBest.