It seems that Tesla is doing more than just developing new smart cars nowadays. The company just launched their own portable battery, a product that didn’t really get much PR or attention. I can’t say that I am extremely surprised!

The new Tesla PowerBank looks really good as you will see in the images attached to this article. But apart from that, it doesn’t impress us much unfortunately.

It has a 3350mAh capacity, which is decent for its size (108 x 30.5 x 23.3mm), but the selling price right now stands at a whooping $45.00. You can get portable chargers for a lot less on Amazon, and some look just as good, too! So, you’re mostly paying for the brand here, which is unfortunate.

Tesla’s PowerBank comes with an integrated USB cable and Apple lightning and detachable micro USB. You can check it out here: 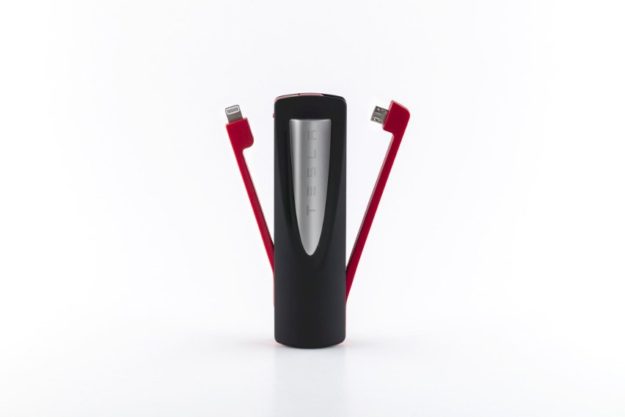 Yes, the product looks really good and I am sure that many people will want to have one just because it’s a Tesla, similar to Apple products that are more expensive but still sell well. However, one of the biggest disadvantages for those in need of one, is that the Tesla portable charger doesn’t have an USB-C attachment. This leaves a ton of Android users on the outside, or looking to spend extra money on adapters or such.

It’s good to see that Tesla is expanding though and I am sure that this is just the beginning. The company will grow for sure and they’ll release a ton of products in the future – some more and others less useful. It’s up for us to decide which is which when that happens.

In case you want to buy one, you can do so on Tesla’s official store page.

But what do you think about the Tesla powerbank? Would you spend $45 on getting yours or not?