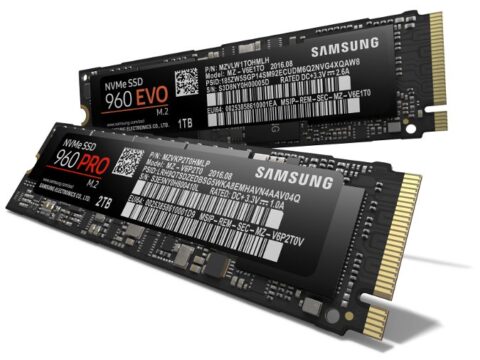 Pretty soon, the time will come when the SSDs will become the norm when it comes to laptop and computer storage, meaning that prices will drop a lot and all these products which are not pretty expensive will become very affordable.

Samsung has made a large step towards this direction, even though it’s just in terms of capacity and speed: they have just unveiled their new SSD for consumers, the 960 EVO and 960 PRO. These will be, at least when they are expected to launch, the fastest SSDs on market, while one model of the 960 PRO will be the largest SSD at a whooping 2TB.

The new storage drives are expected to be launched in October 2016, with the 960 EVO available in 250GB, 500GB and 1TB, while the 960 Pro will be out in 500GB, 1TB and 2TB flavors. In terms of technical capabilities, both SSDs will be pretty amazing. Here are their writing/reading stats based on the model you choose:

These numbers are pretty impressive and I really don’t know what to get more excited about: the actual reading and writing speeds that look great or the fact that we’re starting to have 2TB SSDs available on the market already and we’re one step closer to saying goodbye forever to classic, slower HDDs. Hopefully now that Samsung has upped the bar, other storage drive manufacturers will try to match them and offer better prices.

I say that because when they hit stores, the products – especially the Samsung 960 PRO won’t be cheap. While the 960 EVO is expected to have a decent starting point of about $130 on launch day, the 960 PRO is expected to have a starting price of $330 for the starting model. I am really curious how much the 2TB model will cost, but we won’t find out until the products actually hit the store shelves in October.

Google Pixel Smartphones Are Here and They Plan to Impress You
← Previous
Microsoft to Launch $37 Nokia 216 Phone: All Details Here
Next →
Click here to cancel reply.