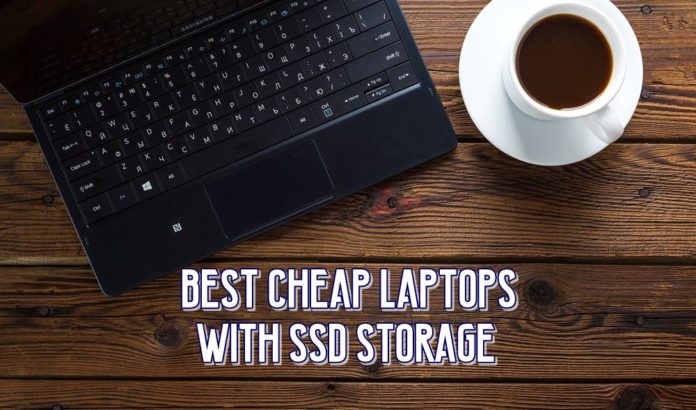 So, you didn’t think that it’s possible to find a really good and cheap SSD laptop this year? Well, fortunately, you can and we’re here to share with you a list of the best laptops with a SSD available on the market in 2018 and all under $1,000.

Until recently, these ultra-fast SSD laptops were very expensive – or just offering tiny amounts of storage that you really couldn’t put to good use. But lately, thanks to the evolution of technology, more and more companies started to deliver these SSD laptops at much more affordable prices. And today, we’re going to share with you the best cheap SSD laptops of 2018, all selling for under $1,000 at the moment of writing this article.

You should always go for a laptops with a SSD instead of a traditional HDD simply because the former are a lot faster and much better than the traditional storage devices. Being able to load up applications and even Windows in a matter of seconds and without adding extra heating to your laptop (since there’s no spinning involved as with traditional HDDs), these are the future. And fortunately, the future is no longer expensive.

So here are the best cheap SSD laptops under $1,000 for this year. We’re listing them below in case you’re in a hurry to check them out, but we also have a detailed review of each below if you want to investigate more. But worry not, we did a ton of research and we’ve selected the best of the best under the budget:

Please note that all the laptops were selling for less than $1,000 at the moment of writing this article, but prices change over the year. Do your own due diligence and personally check all the prices of these products.

Now let’s find out more details about each of the products listed below. All of them are amazing buys and you should make your choice based on the budget you have (and how close to the top you can go). So without further ado, here are the best cheap SSD laptops of 2018, listed from the cheapest to the most expensive at the moment of writing:

Please note: We get commissions for purchases made through links in this article.

The cheapest laptop on our list actually offers a lot for the money and can be considered an amazing deal. It delivers an extremely solid performance and a blazing-fast SSD – it’s almost too good to be true!

But it is true! This is a really solid laptop powered by an 8th Generation Intel Core i5-8250U Processor that runs all the way up to 3.4GHz if you Turbo Boost it. Like all the laptops on our list, it has 8GB of RAM and it also has a dedicated graphics card – the nVidia GeForce MX150. It only offers 256GB of SSD storage, but I still consider it a great deal!

The dedicated graphics card is what really surprises for this price range. Thanks to it, the laptop is capable of running current generation games, more advanced programs and performs better overall. It’s true, the MX150 is not the latest in terms of GPU, but it’s much better than an integrated one and overall a great choice!

The laptop itself has a standard size – 15.6″ and supports 1920 x 1080 pixel resolution, so you can see anything in beautiful Full HD mode. It also has an optical drive which is a rare find for laptops nowadays and an extremely good battery: its manufacturers claim that it can go up to 15 hours straight on a single charge. I think that for the average user 8 to 10 hours would be more realistic, but it’s still really good!

All in all, this laptops sells at a great price and has surprisingly good specifications – so it’s definitely worth checking out. It’s a rare find!

This model is a bit more expensive than the first and it has it’s fair share of PROs and CONs. For starters, it’s the only laptop on our list offering an impressive 512GB of SSD storage, so for those who need more fast storage, this is the best pick!

It also has some real horse power under its hood thanks to the Intel Core i7-7500U Processor that runs natively at 2.7GHz (but can be turbo boosted all the way up to 3.5). It also has 8GB of RAM – but we already know that all the laptops on our list offer that.

The biggest con, unfortunately, is that it only has an integrated graphics card – the Intel HD Graphics 620 with shared graphics memory. This means that you won’t be able to run current generation games on it and even though integrated GPUs have improved a lot recently, you can’t expect amazing performance even on older games.

But for everything else BUT modern gaming, this laptop is a really good find, especially because of its large SSD. It also comes packed with an optical drive, SD card slots and all the other slots that new laptops offer, so you’re covered here.

It’s a 15.6″ laptop as well, but because of the limitations of the integrated graphics card, it can only offer HD resolution (1366 x 768 pixels). It’s still good for watching movies, editing photos and browsing the web, even though it doesn’t sound as good as “Full HD”.

The ZenBook almost didn’t make it on our list, but eventually we decided that it’s worth including for a number of reasons. The first and most important is that it’s a small, ultraportable laptop and we know that sometimes that’s exactly what you want.

It’s very thin and weights just 2.6 lbs, so it’s extremely easy to carry around, but it’s also smaller than the others on our list at 13.3-inches. It’s also very durable thanks to its aluminum body, which also gives it a sleek, nice design. It also has some bling – like the integrated fingerprint sensor for increased security.

Since it’s made for portability and allowing you to use it anywhere in the world, it has a solid anti glare display (full HD as well – 1920 x 1080 px), with a wide view 170 degrees angle, meaning that the images on the screen are always easy to see and text is easy to read, even in brighter environments.

In terms of performance, it runs really fast. It is powered by an 8th gen Intel i5-8250U Processor and has 8GB of RAM, as well as the super fast SSD storage all the products on our list must have. In this case, we’re getting a 256GB SSD.

The biggest problem is that for this price and size, it only offers an Integrated graphics card. This makes it a bit expensive in my opinion, but we couldn’t find better deals than this one so it had to be featured. However, if you don’t really need a smaller, highly portable laptop, the larger ones on our list are definitely a better choice in terms of performance.

The Editor’s Choice and the best performing laptop on our list, the Acer Nitro 5 is a real beast! You’ll absolutely love it, as it is capable of handling anything you throw at it, including current generation games and resource demanding programs and applications. It’s really good and at this price, it’s a steal!

This cheap SSD laptop offers 256 GB of storage which could indeed be better, but it really compensates with the rest of goodies. For starters, it is powered by the Intel Core i5-7300HQ Processor and 8GB of RAM, but the cherry on top comes from the amazing graphics card: a state of the art nVidia GeForce GTX 1050 Ti can be found under its hood, with 4GB of dedicated RAM.

This means that, as I already said, you’re getting a real beast with the Nitro: and one that looks incredibly well too thanks to its rugged, beautiful design and colored backlit keyboard.

It’s also a fairly sized laptop at 15.6″ offering full HD resolution and incredible image quality that will make playing games and watching movies equally rewarding. It doesn’t have an optical drive, but I don’t think you’ll need any.

With a really good battery to round things up (around 8 hours of usage on a single charge), this SSD laptop is our recommended product on the list and the one we’d choose over all the others.

But we have even more options in case that you need then. In the case of the VivoBook, you’re getting a lot more storage – so if you really have a lot of content to store on your laptop, this might be a better choice.

Although it’s the most expensive on our list at the moment of writing, it still sells for under $1,000 and offers a nice storage combo: 256GB of ultra fast SSD storage, plus a 1TB HDD for storing all the files that don’t really need the extra speed offered by the solid state drive.

The other specifications look really good too, as it is powered by Intel’s Core i7-8550U (an 8th generation processor running at a base speed of 1.8GHZ but boostable up to 4.0 GHz), as well as 8GB of RAM. This one also has a dedicated graphics card, which isn’t as good as the Nitro’s, but still a good choice and much better than an integrated option.

In this case, we’re talking about the NVIDIA GeForce MX150 GPU which can still handle more recent games and improves the overall performance and value of the laptop.

With a display of 15.6″ and full HD resolution supported, this laptop looks really good, has a backlit keyboard and is very thin (0.7″) and portable. It doesn’t have an optical drive, if you really need something to complain about – but that’s really not a big issue in the modern world where traditional disks are rarely used anymore.

You have a lot of great choices above – really powerful laptops that offer a lot for the money. These are clearly the best cheap SSD laptops of 2018 so no matter which one you choose, you can rest assured that you’ve made an awesome choice!