WordPress Gutenberg is nearly here. A major update for WordPress, also known as WordPress 5.0, Gutenberg completely changes the way the editor works and everybody is mortified about this. But is WordPress Gutenberg really that bad and such a big change that people used with the old ways won’t be able to accept?

I’m going to share with you my impressions on WordPress Gutenberg in today’s article, after spending some time testing WordPress 5.0 and the main changes it brings to the editor. Spoiler: It’s not that bad as you might think!

The new editor: Blocks. Blocks everywhere! And, for some reason, everybody seems to hate them. Although most people criticizing the new Worpdress blocks in the editor, didn’t get the chance to test them out yet. 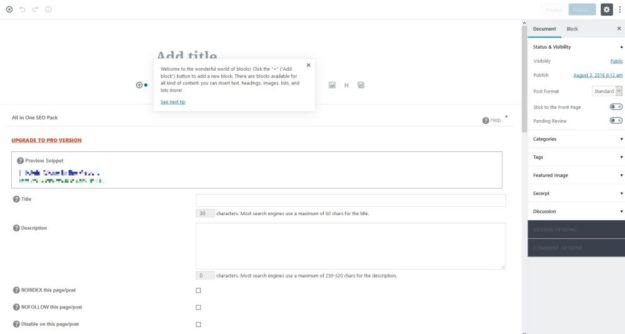 Yup, this is basically the main change brought in by WordPress Gutenberg: blocks instead of the old, easy to use, editor that everybody knew how to use. The new blocks replace the “Microsoft Word” feel of the WordPress editor and comes with a few tweaks of its own, all intended to simplify the life of blog authors using WordPress.

Basically, each paragraph in your post or page becomes a block. Each image has its own block. Each list, quote, gallery and so on. Everything is a block. Blocks are everywhere and you can edit, modify and customize (did I just say the same thing using three different words?) each block individually by simply hovering your mouse over: 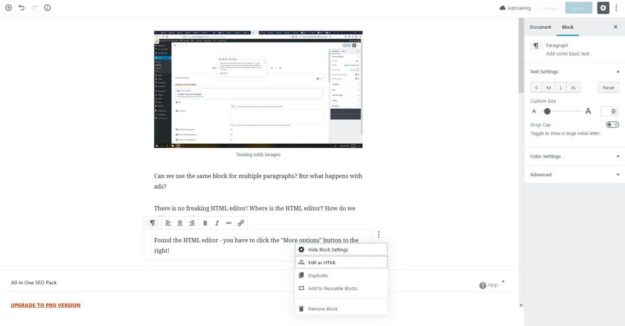 As you can see in the image above (you can click it to enlarge it if you can’t really see!), there are a ton of options for each block. In most occasions, you won’t have to change or do anything – so your work flow isn’t going to be affected. You won’t have to pause after each paragraph to create a new block and set it up as you want it to be. No – pressing ENTER on your keyboard will automatically create the new paragraph with the settings of the one above. Easy peasy!

But you do have a lot of customization options available – options that were harder to find or required a bit of HTML knowledge to input. For all these, you will have the right sidebar with options to increase the text size or change other things as you see fit, just with a mouse click (or more).

Here’s me testing with a few of the block types and options in WordPress 5.0 aka Gutenberg. I am using WordPress since 2008 and I heard many people say that there’s a huge learning curve with the new WordPress version. I tend to disagree as it only took me a couple of minutes to write everything, upload the image, test the new stuff and write the brilliant words in the screenshot below: 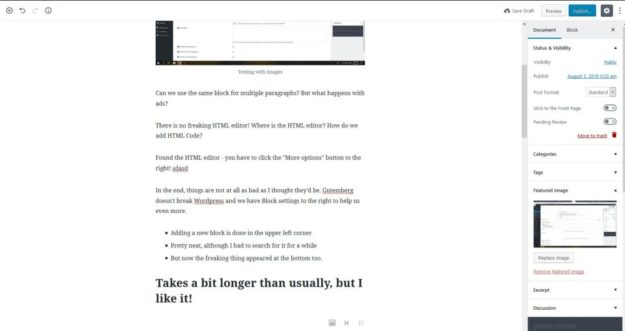 Of course, there is a bit of a learning curve since there are new things added to the mix. The biggest problem for those of us who have been using WordPress for years (or at least a long time) is that we already know where everything is. And we’ll have to create new habits, learn new item placements and get used to new things.

This always takes a bit of time and I won’t lie and say that I was an expert user of WordPress Gutenberg after the first 2 minutes. But everything is a lot easier than I have anticipated and, even more, it seems that nothing from WordPress 5.0 destroys websites. At least not in the case of a few regular blogs I have tested it on.

This is good news in the end, because everybody was worried that Gutenberg will completely destroy their themes and layouts and everything else. Well, it seems that’s not the case based on my tests – and I tested it on a theme that was launched around 2015, as well as a newer one.

There might be cases where themes might get some things ruined by the upcoming update, but I believe that most users should stay calm about this.

It’s actually the users that seem to have the biggest benefits from WordPress Gutenberg, which has been created to simplify everything and make it even more accessible to those who have absolutely no knowledge about programming or anything backend related.

They’re also removing the need for many plugins that some of us have been using today by simply introducing these blocks – and a ton of them, as you can see below:

The blocks allow you to easily and instantly customize each page on your website, exactly as you see fit without the need of a plugin or external editor. In turn, this makes your website run faster and less prone to breaking by using plugins that are not compatible with your version of WordPress or theme.

A potential problem appears, though, for those who use plugins that require shortcodes. If those plugins will have to be uninstalled after the launch of WordPress Gutenberg (which I doubt), then all the shortcodes you have used in your posts will no longer work.

So in the end, a number of people might be affected by some of these changes – but nothing is certain right now. I doubt that WordPress plugin developers will stop being able to update their plugins, or you won’t be able to use them anymore. So everything that used to work will still work, while the future will open up the door for multiple great new features, options and possibilities.

In conclusion, I can say that I was pleasantly surprised with how quickly I was able to adapt to WordPress Gutenberg and how nicely all those blocks fit together into the large puzzle, allowing those with a bit more time to spend customizing their posts to create truly unique designs and experiences that will benefit the users in the end.

For those who don’t want anything extra or fancy, the changes brought in by the 5.0 version of WordPress won’t really matter a lot. You will still type the text in the same way, press Enter to start a new paragraph and do everything almost exactly as you did before. You won’t be forced to waste time setting up blocks, choosing various elements or customizing. But if you want to, you have this option.

Of course, it will take a bit to adjust to the new editor since things will change positions and that always takes time to adjust to – but all in all, it does look like an improvement and not just a stupid move made by the WordPress developers, as many of us thought based on initial opinions and chatter about Gutenberg.

No, Gutenberg is a nice, visually attractive update to WordPress, one that opens up the door to endless customization and possibilities and one that I am sure will be used by many people to drive their blog forward and turn it into an unique, amazing experience for their users. As for everybody else – no difference will be felt.

But what do you think about WordPress Gutenberg? Did you get the chance to play with it a little bit? Share your thoughts below!