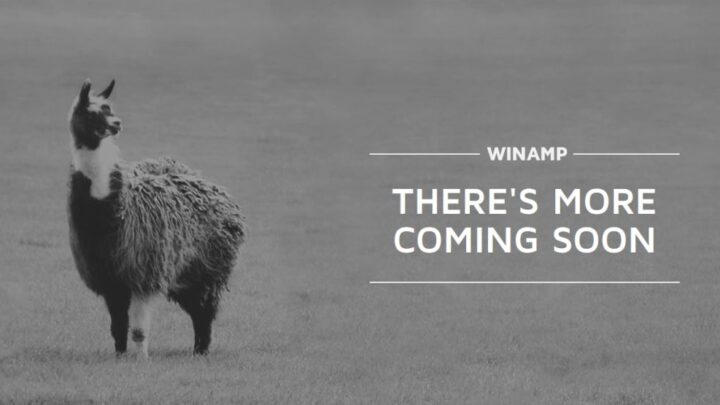 I can’t stop smiling while writing this article about the upcoming update for Winamp, slated for release sometime in 2019. You see… I am writing this while the latest Winamp version (5.666) runs in the background, playing my “Writing” playlist that I have worked on since around 2014.

I have a gazillion other playlists saved on my computer for various occasions, some of them dating back to 2009. I’m not only that old, but also that organized! Winamp has been my go-to media player since I started listening to music on a computer and since it’s previous update was released back in 2013, I tried to find something new.

But nothing was as easy to use, as simple yet efficient as Winamp. So I stuck to this outdated version that still works like a charm on modern computers.

But now I hear that Winamp is making a comeback in 2019. The legendary music player was purchased back in 2013 by Radionomy – without any work made on it until recently. Old clients are still available for download and they still work, but that classic Bento skin and all the features are a bit dated.

Don’t get me wrong, Winamp 5.666 is working like a charm and getting the job done, but I wouldn’t mind some new life injected in the best music player of all time.

Sure, I am old and people use Spotify nowadays or other live streaming services, listening to music on their phones and maybe using other programs to play the music on their computers and laptops… but that doesn’t make it for me.

I have built, over the years, a massive mp3 collection that I constantly trim off and improve. I have over 4,000 hand picked songs from my favorite artists and various other one-hit wonders. I love listening to music and I’ve invested blood, sweat, tears and a ton of money in getting all these playlists.

I have tried to move these playlists online – not only for safekeeping, but also for easy access on the go – but I still haven’t found a platform where all my songs are available. Youtube deletes videos and doesn’t let you know their name, so you might lose that amazing song nobody has heard before without even knowing. Spotify is great, but lacking many of the older songs that I have saved from the 50s to the late 80s.

But Winamp never fails. I have my physical copies of my songs on my computer and I always will. Unless an EMP bomb hits, killing all technology. I have saved my MP3s to the cloud, I have backups on external HDDs, a different laptop and a memory stick. My music is my treasure and only Winamp knows how to play it.

And, judging from a recent interview offered by Radionomy’s CEO Alexandre Saboundjian to Tech Crunch, a brand new Winamp version is coming in 2019 with an infusion of modern features.

What’s the biggest thing that Winamp 2019 will let us do? According to Saboundjian: “You can listen to the MP3s you may have at home, but also to the cloud, to podcasts, to streaming radio stations, to a playlist you perhaps have built.”

This means that Winamp will be available on your phone too – but really, I don’t really care about that. I want to see some love shown to the desktop app that I grew up with and I’m not planning to stop using it!

And if waiting until “sometime” in 2019 for the new Winamp does sound like a nightmare (now that you know that a new one’s coming), I have some even better news: on October 18th, 2018, there’s a brand new update to be released: Winamp 5.8, which will fix some compatibility issues and bugs, but will make no other changes.

It’s still exciting news and proves that the guys over at Radionomy are finally getting some work done. And even though the younger generation might consider Winamp a trip to the past, there’s still a lot of us older blokes and gals who worship this music player and will never stop using it. And all of us are extremely happy right now.

Bring it on, Winamp! We’ve been waiting for this for a long time now!

Should You Buy an iPad for Your Kid - and When?
← Previous
Not a VPN User Yet? Find Out Why You Should Become One Immediately
Next →
Click here to cancel reply.