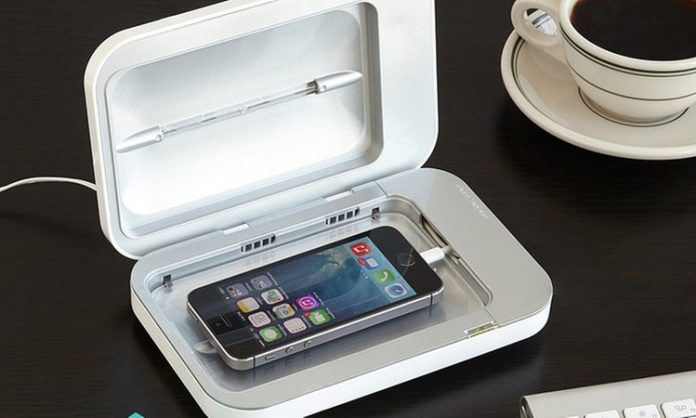 Did you know that a cell phone can have 18 times more bacteria than a public restroom? This pretty scary thought makes you feel that the existence of PhoneSoap, a gadget that kills bacteria on your phone or phablet, a true blessing. Because you only need to catch one nasty bug that your phone carried around in order to realize just how important this gadget you never knew existed is.

Please note: Our blog gets commissions for purchases made through links in this article.

Even better, the PhoneSoap also works as a phone charger. Very convenient: let your phone or phablet charge and at the same time, this device will work its magic and kill bacteria on it. Cool!

So how does this gadget work?

First, let’s find out its whole name and surname: PhoneSoap 2.0 UV Sanitizer and Universal Phone Charger. Pretty informative, I’d say, so you already know what it does. According to studies and tests, it safely kills 99.99% of germs utilizing bacteria-zapping UV rays.

The device fits larger phones and phablets like the iPhone 7s Plus, Samsung Galaxy S7, LG G4, and all phones under 6.8”L x 3.74”W x .78”H. It also has an universal phone charger with USB port, meaning that while it’s working its germ killing magic, it can also charge your device.

The PhoneSoap device got a bit of fame when it was featured on Discovery. During the show, it was proven that its bacteria-zapping UV rays not only kill germs, but can kill up to 99.99% of bacteria. In other words, your device will be clean and safe and your risks of getting the next zombie virus – or any real disease caused by the invisible baddies on your phone – is minimal.

What is one of the most widespread problems the bacteria on your phone can cause?

Believe it or not, it’s acnea! There are some types of acnea that come directly from talking on the phone: the bacteria on it will get onto your facial skin when talking to your phone. If you already have acnea, the extra bacteria are ready to cause chaos.

Plus, even though most of the effects of the bacteria that jumps off the phone onto our hands and face are not seen, they still keep our immune system under pressure. And you never know when enough is enough and you catch something bad off it.

So why not play it safe? The PhoneSoap is relatively cheap and it has a proven effect on killing bacteria and keeping our devices clean. It’s time to look after your health, and getting one of these items is an important step you’ll take in the right direction.