Although many people still frown when they see children glued to their smartphone’s screen, the truth is that the world is evolving and changing whether we like it or not. Facebook Messenger Kids is Facebook’s way of letting younger children be part of the social media (they are anyway part of no matter what), but giving some control to the parents.

Many people bashed Facebook for creating Messenger Kids in the first place but I, as a parent, love it. Although my kid is too young to have a Facebook account (or know how to read or write, actually), I know of many older kids – but still under 13 – who have their own Facebook account.

In other words, even though this shouldn’t be happening, it is: kids want to be on Facebook and they will get there. Facebook Messenger Kids allows them to and greatly reduces any potential risks they might be exposed to otherwise.

And the latest feature introduced by the new app might give you the shivers at first, but there’s no reason for that, as you will see soon. Now, Messenger Kids allows children to add their own friends in order to be able to chat with them.

However, they will still need both parents to confirm the friendship before it is activated. So you still have control over this and you can make sure that only real, trustworthy people that your kid knows are added on that list – but you also give your child some sort of freedom here.

How does the new feature work? 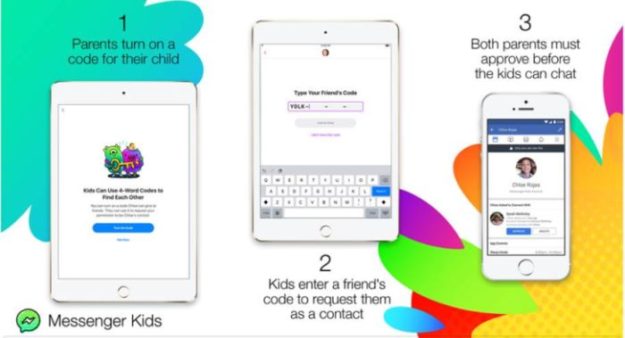 It’s pretty simple, actually: Facebook Messenger Kids can generate a four-word code for each child using the app. They can share this code with their friends and use it to add each other as contacts. And once each kid adds the other one’s code, their parents will receive a notification and will have to approve the friendship.

The good thing is that the parents of the kids no longer have to be friends on Facebook – this being the requirement until now and limiting a lot potential friendships between children.

So you still have full control over this, while your kids feel to be a bit more independent and you don’t have to add people you don’t really know as friends, just so your kids are friends as well. It’s a win-win situation.

Have in mind that this new feature is turned off by default and you have to opt in to activate it. So after updating your app today, make sure to turn the feature on if you want to let your kid use it.