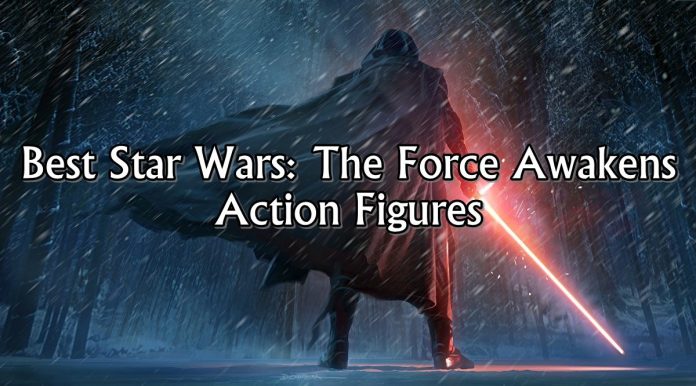 The Star Wars franchise has always been big and it will continue to stay big thanks to the newly released (and announced) Star Wars movies. The launch of Star Wars: The Force Awakens marked the birth of a new generation of Star Wars fans, while fans of the previous series updated their preferences to the new heroes and villains. And for everybody that’s interested in action figures, the time is perfect to increase the numbers of your Star Wars-related collection with brand new goodies. And to help you get there, we’ve selected the best Star Wars: The Force Awakens action figures to own right now. You’ll love them.

The Star Wars: The Force Awakens universe is huge and the number of toys, action figures, play sets and everything else is impressive, so there’s definitely a lot more on offer than what we have for you on this list, but we consider it a great place for a start. So check out our recommended Star Wars: The Force Awakens action figures below, perfect for fans and collectors alike:

Please note: Our blog gets commissions for purchases made through links in this article.

Bad guys are usually extremely popular and Kylo Ren is one of them. He has the mask on, which makes him look even scarier, so this one’s a no brainer for his fans and those of the Star Wars universe. Get it here (US & World) or here (UK & Europe).

Rey is by far my favorite female character in the Star Wars universe (there, I said it!) and I sure hope I am not the only one who feels it. This action figure manages to capture most of her charm and comes with bonus accessories to make the deal even better. Get it while it’s still in stock here (US & World) or here (UK & Europe).

Poe is not one of my favorite Star Wars characters – on the contrary – but that’s not what many other people think and for them I have an impressive 18″ Poe Dameron action figure to recommend. Bigger, better, here to stay. Check it out here (US & World) or here (UK, Europe).

Dubbed by some as the new Han Solo – mostly because he’s so funny, Finn is quickly becoming an icon. And you can get an action figure that’s perfect for collecting and treasuring here (US, World) or here (UK, Europe).

I will let you decide it BB-8 is better or funner than R2-D2, but until then you can grab this Talking BB-8 figure and have fun listening to over 17 sound effects that it can play. Check it out here (US & World) or here (UK, Europe).

Even though she didn’t rise to the expectations, I am sure that she’ll have a lot more to prove in future movies and we have to admit that, thanks to her awesome cape, she looks really nice. If you want to add Captain Phasma to your collection, you can get the action figure here (US, World) or here (UK, Europe).

If you can’t really decide, or you just want them all, this playset is a real gem. It includes Han Solo, General Leia Organa, Poe Dameron, Chewbacca, Flametrooper, Captain Phasma, Kylo Ren, Rey, Finn & BB-8, so most of the really important characters in Star Wars 7. Get it here (US, World) or here (UK, Europe).

Exclusively available on Amazon, this is the must have playset for those who favor the dark side. You get a pack of 7 troopers and 14 accessories, including Captain Phasma, Snowtroopers, First Order Stormtrooper and so on. A great addition to any collection, so check it out here (US, World) or here (UK, Europe).

This playset is pretty important as it is the first that featured a Maz Kanata action figure. And together with her, you also get Rey, Finn and BB-8, plus some really nice accessories. If you like the good guys, this is a must have! Click here to get it (US & World) or here (UK & Europe).

Meticulously crafted die cast action figures of Rey and BB-8, as well as a bunch of accessories for complete customization (blaster, backpack, staff, standing base), this is a great addition to any collection of a true Star Wars fan. Get them while they’re still available here (US, World) or here (UK, Europe).

Yes, another Poe Dameron action figure, this time a little bit smaller than the first one I recommended, but still insanely cool. This action figure comes with four accessories for the best pilot in the Galaxy. Click here to get it (US, World) or here (UK, Europe).

Do you want to hear some of Kylo Ren’s phrases from the movie (like “I’m immune to the light” or “Together we will destroy the Resistance and the last Jedi”)? Then get this massive action figure and you’ll always have a mini Kylo Ren by your side… which might be cooler than it first sounds! Get it here (US, World) or here (UK, Europe).

Here you have them! 11 great action figures or play sets based on Star Wars: The Force Awakens and I am sure it will be difficult to choose just one or a few because you know you just need to have them all!

How to Change User Account Control (UAC) Levels in Windows 7